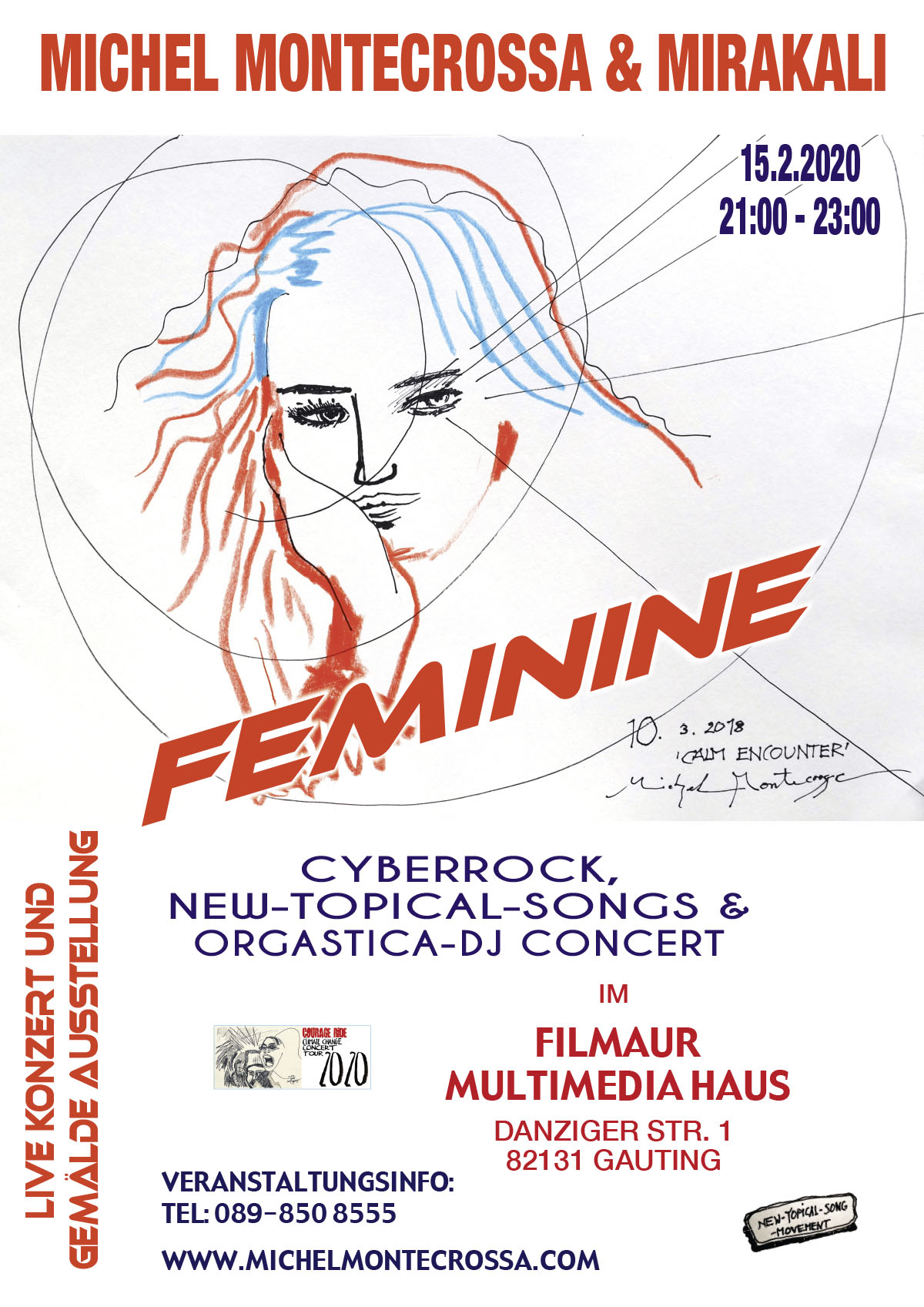 Michel Montecrossa says about the ‘Feminine’ New-Topical-Songs, Cyberpoetry & Orgastica-DJ Acoustic & Electric Concert: “The Feminine Concert is the celebration of love as our greatest treasure.” 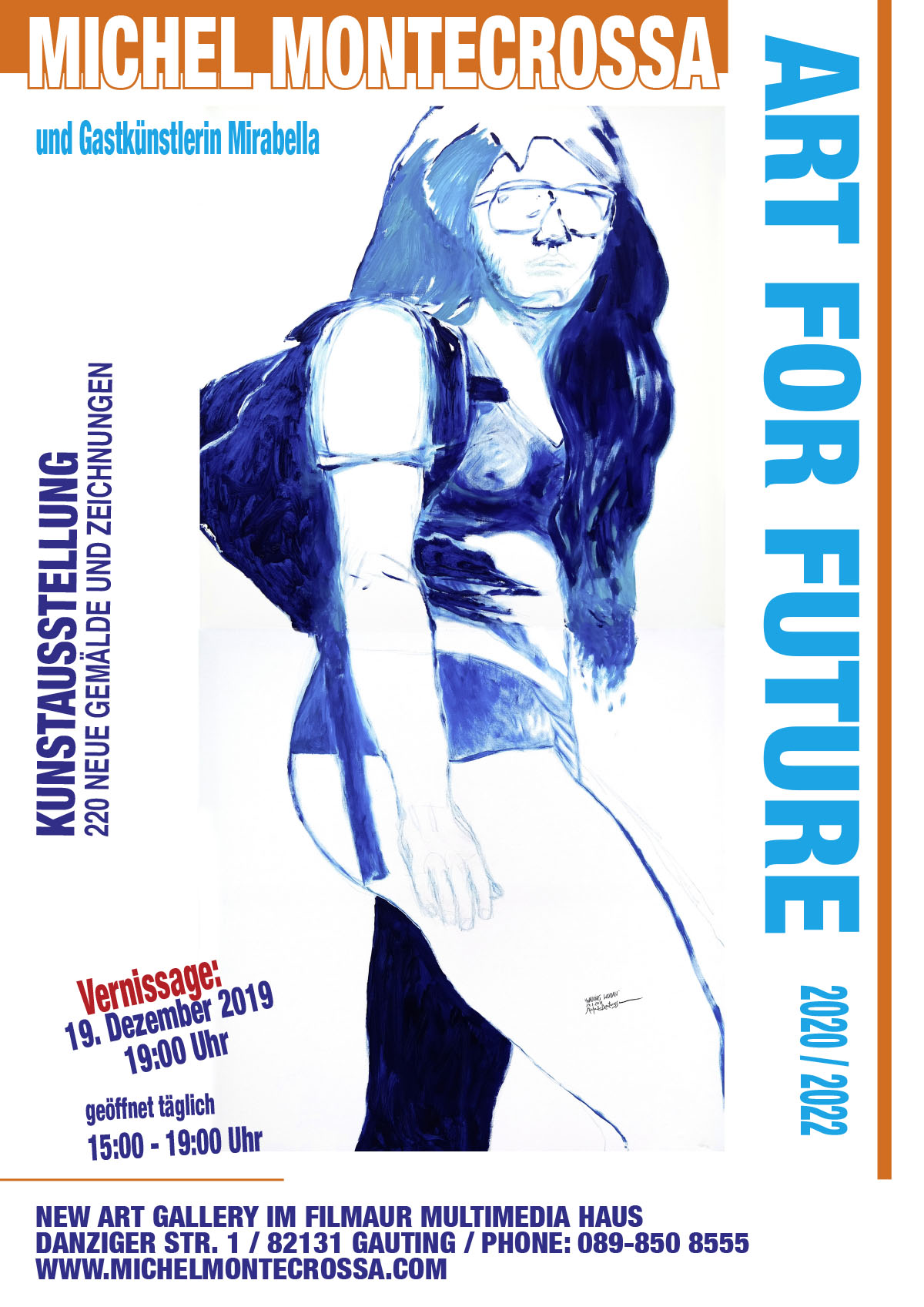 Michel Montecrossa says about his Art For Future Exhibition:
“My drawings and paintings that are presented at the Art For Future Exhibition are a holistic consciousness journey through the dimension of soul experience in the world. They are presented in various zones of the Filmaur Multimedia House showing aspects of this experience in groups of paintings and drawings like the ‘Encounter & Enigma Series’, the ‘7 Faust Paintings’, or the ‘Mirakali Bright Earth Mirror Room’ with paintings and video installations for Michel Montecrossa’s full-stream-of-consciousness movies like ’The House Of Time Series’ and many more zones and aspects. In addition to 212 paintings and drawings created by me the Art For Future Exhibition also includes 8 digital Teenage Anime and Manga drawings by Mirabella, my highly talented daughter.”

Michel Montecrossa's Full-Stream-Of-Consciousness feature film length movies can be bought now as downloads from Vimeo. Michel Montecrossa's movie-art means expansion of the cinematic expression language on all levels: the picture, the sound, the word, the music, the action, the movement of meaning, the rhythm of editing, the acting, the CG art, the organicality of light and moods, the poetry. Michel Montecrossa's Full-Stream-Of-Consciousness Movies are a Fest of virtuality and organicality of image and music, of sensuality and spirituality dedicated to the living celebration of humanity.
Michel Montecrossa movies bring to the audience a new level of awareness, great music, thrilling action, emotion, passion and the unexpected. 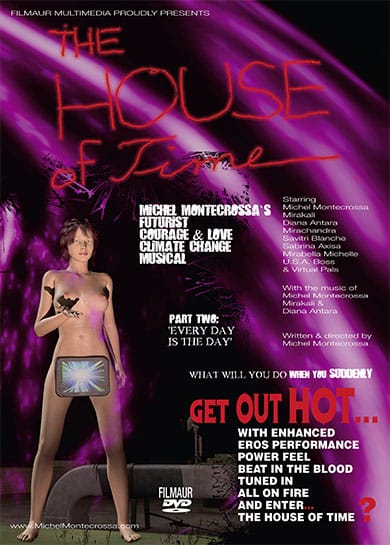 'The House Of Time, Part Two: Every Day Is The Day'

The saga of Cyberwarrior Michel, his girls and his music unfolds in Sky-City into the next level of song-power, Cyber-Magic and stunning future-vision. Be ready for the moral of immorality, the shaking up of Sky-City, the ultimate sensuality of virtual and organic reality world. Get hot with Cyberwarrior Michel, his girls Mystery and Hazel and the Agent-Dancer Hussein activating their Avatars, their virtual-erotic personalities and their virtual action pals to blow the entire concept of Sky-City and Astrid's studio up into a supra-psychological interaction with Cyberwarrior Michel's brainstorm songs. They are pushing organic and virtual world forward into an ultimately liberating total orgasm of consciousness. Don't hold back your catharsis of love: See, feel and listen!
Come to The House Of Time Part II: 'Every Day Is The Day'! 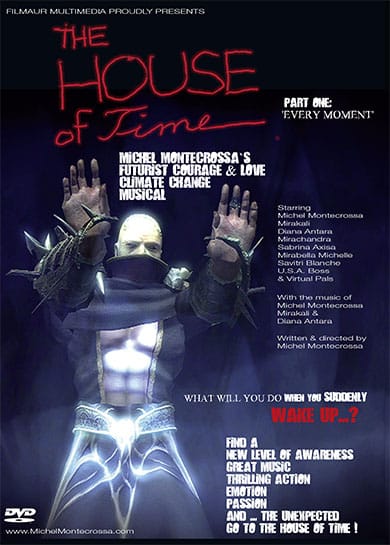 'The House Of Time, Part One: Every Moment'

Michel Montecrossa's Futurist Courage & Love Climate Change Musical
telling the story of Cyberwarrior Michel becoming champ & stream of consciousness musician. Together with his girls Mystery and Hazel and virtuality friends he is bringing courage and love power-music into the multidimensional, virtual and organic world of humanitarian, economical and ecological crisis. 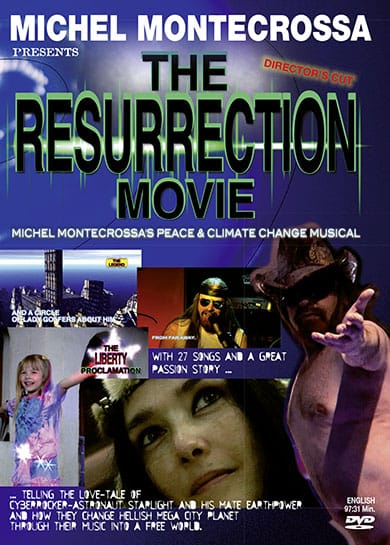 Michel Montecrossa’s evolved Peace & Climate Change Musical telling the love-tale of Cyberrocker-Astronaut Starlight and his mate Earthpower and their battle on hellish mega city planet for a free world. 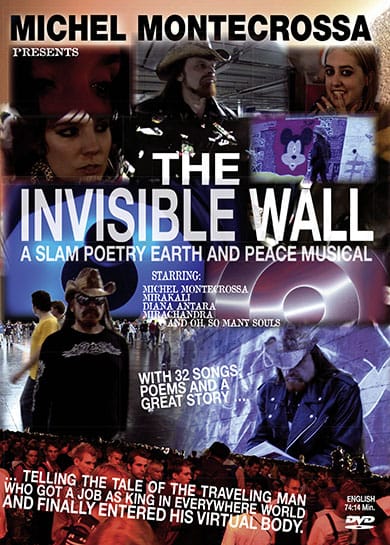 Michel Montecrossa's orphic Slam Poetry Musical looking through the many symbols and events of life to the reality behind. ‘The Invisible Wall’ tells the story of the Travelin’ Man who for some time has a job as king. Later he drops the job and experiences an existential revolution. It is the door to the reality of love and a new birth in consciousness. ‘The Invisible Wall’ is poetic music-cinema telling the story in a multidimensional way. Various roles express themselves through changing persons, thus creating a web of awareness reversals. 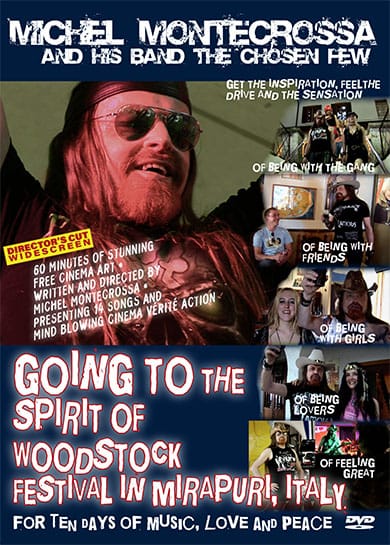 'Going To The Spirit Of Woodstock Festival'